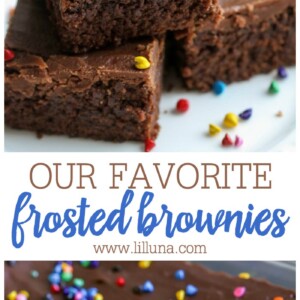 Our favorite frosted brownie recipe. They’re soft, chewy, topped with a delicious frosting and are great for holidays and get togethers.

We may have a slight obsession with brownies (especially these frosted ones!) – buckeye brownies, Oreo brownies, pumpkin brownies. We have them all and love to make them for company, holidays and any other function for those that love chocolate!

My family is particularly obsessed with this next recipe. They make it weekly and it’s devoured within minutes (no joke)! Even my hubby who doesn’t like brownies likes these brownies.

These frosted brownies are ones we’ve been making for as long as I can remember. They’re great served warm with ice cream or even plain. We also like to change them up based on holidays and occasions with different toppings and sprinkles. Oh yeah – and they’re simple!

Here are a few tips and tricks for making brownies…

How to Make brownie frosting + brownies

To begin making these brownies, blend the melted butter, sugar and vanilla in a bowl. Add the eggs and mix well with a wooden spoon.

In another bowl, mix together the flour, cocoa, baking powder and salt. Combine the wet and dry ingredients and mix until well blended. Spread into a greased 9×9 pan.

BROWNIE FROSTING. While brownies are cooling make the brownie frosting by mixing ⅓ cup sugar, milk and butter in a small sauce pan on medium/high heat. Bring to a boil and let boil for 30 seconds. Remove from heat and stir in chocolate chips until melted.

Pour over brownies and spread. Top with sprinkles right away before frosting sets.

This brownie recipe makes a perfect base for for so many brownie variations.

This recipe is for a 9×9 pan of brownies. If you want to make other sizes use the following information as a guide:

How to Cut and Store Brownies

Unfrosted: use a plastic knife when the brownies are still warm. It will slice like butter.

Frosted: allow to cool completely and for the frosting to set. If you used parchment paper, then lift the brownie block out of the pan. Use a sharp kitchen knife and slice. Clean the blade after each cut.

Storage: These brownies can be stored with or without the frosting. Keep them in an airtight container, on the counter, for 3-4 days. Separate any layers with wax paper. These brownies can also be frozen. If they are frosted you will want to flash freeze them first. Do this by placing the brownies on a baking sheet in the freezer. Once frozen wrap each brownie in plastic wrap. Store all the brownies in a freezer safe container for up to 3 months. Unwrap before thawing.

You will definitely want to keep this recipe. It’s a brownie with frosting but not a cake. Hard to explain. Just know that it is loved by many and will definitely be a family favorite. 🙂

For more brownie recipes, check out: 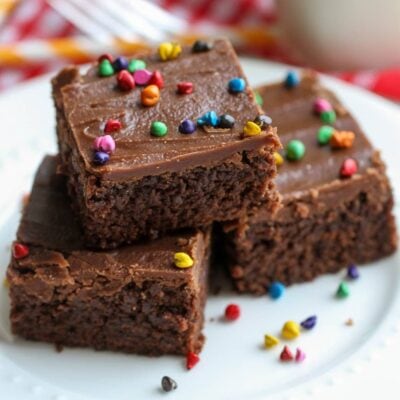 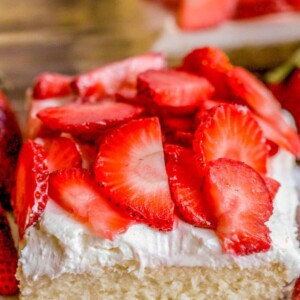 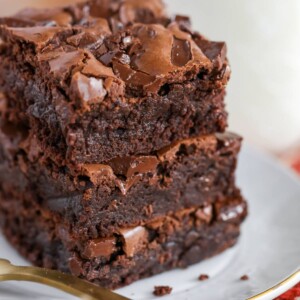 Dense, chewy, and topped with chopped chocolate, these fudgy brownies are every chocolate lover’s dream! Our classic Homemade Brownies will always be our go-to, but when we want something a little extra… 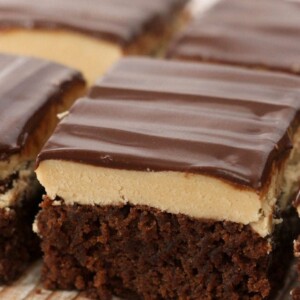 These Buckeye Brownies have 3 layers of goodness with a brownie base, a peanut butter fudge center and chocolate top. They’re the perfect dessert for the chocolate and peanut butter… 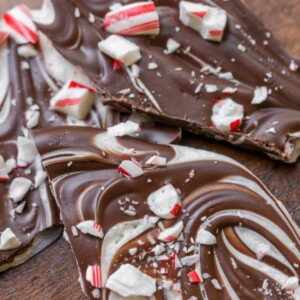