After having these Twice Baked Potatoes, you’ll never want regular baked potatoes again! These super easy potatoes are loaded with sour cream, cheese, bacon, and seasonings! For being such a delicious side, they are SO simple!

We love potatoes in our home (especially Mashed Potatoes and Funeral Potatoes), but have come to love these simple twice baked potatoes as a classic side dish for any meal, and a twist to the typical potatoes we all know and love. 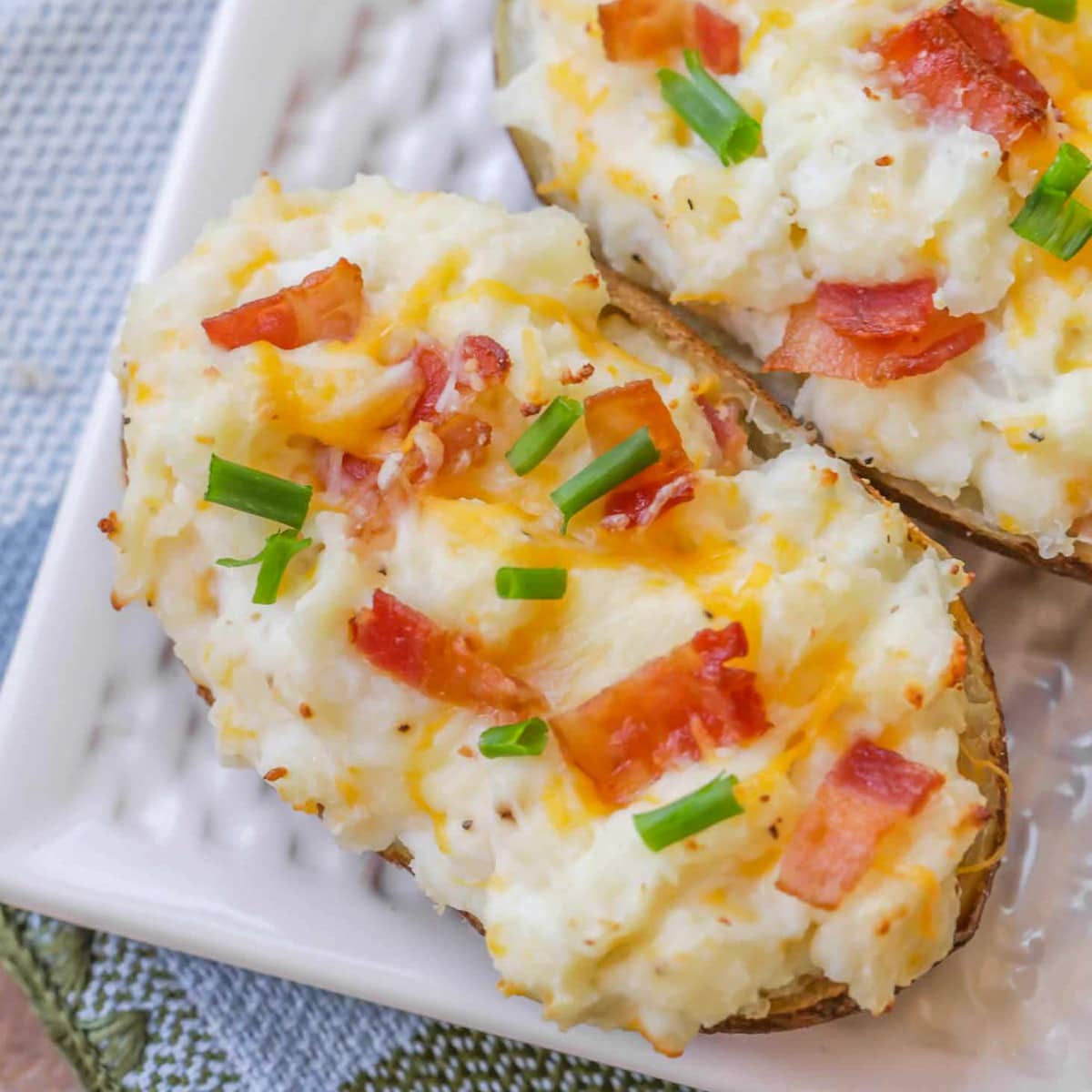 Have you tried making twice baked potatoes before? If not, you’ll realize you’ve been missing out because today’s easy recipe is filled with sour cream, bacon and cheese!

What’s a twice baked potato? Essentially, they are baked in the oven like a normal potato, cooled, the insides are spooned out, mixed with cheese, sour cream, bacon, and all kinds of other delicious stuff, put back in the skins, and baked a second time.

Sounds amazing, right?? Believe me, it is! We even have a Twice Baked Potato Casserole that is delicious! These twice baked potatoes do take a little time, but they are delicious and still easy. 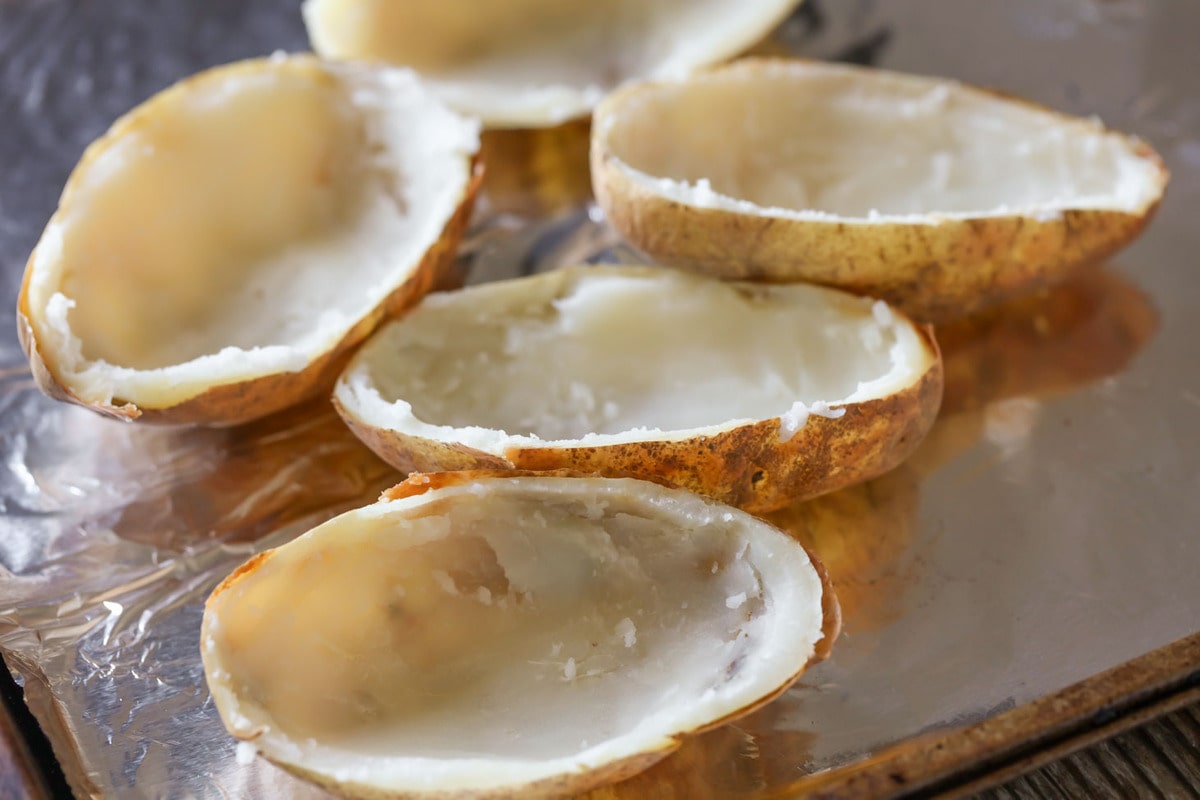 How to make Twice Baked Potatoes:

Like I said before, these potatoes do require more time than regular baked potatoes, but the same amount of effort. The most time consuming part is baking them in the oven!

BAKE ONCE. To make these potatoes, start by piercing the potatoes (we recommend using Russet Potatoes) with a fork several times, and baking them for an hour at 400°. Once they come out of the oven, let them cool for 10-15 minutes.

FILLING. Cut potatoes in half and spoon out most of the potato insides, and place them in a bowl. Brush the oil mixture over the tops and bottoms of each potato skin.

Mix about 1 cup of cheese, sour cream, bacon pieces, and salt and pepper with the insides of the potatoes. Mix well. NOTE: To keep your potatoes from getting gummy: keep the potatoes warm and do not over mix.

Once you have your papas done and made, you can top them off with all your favorite toppings! Sour cream, cheese and bacon are already mixed into the potatoes but you are welcome to add more. Other toppings include:

They really are such a great side dish and perfect for any potato lover. 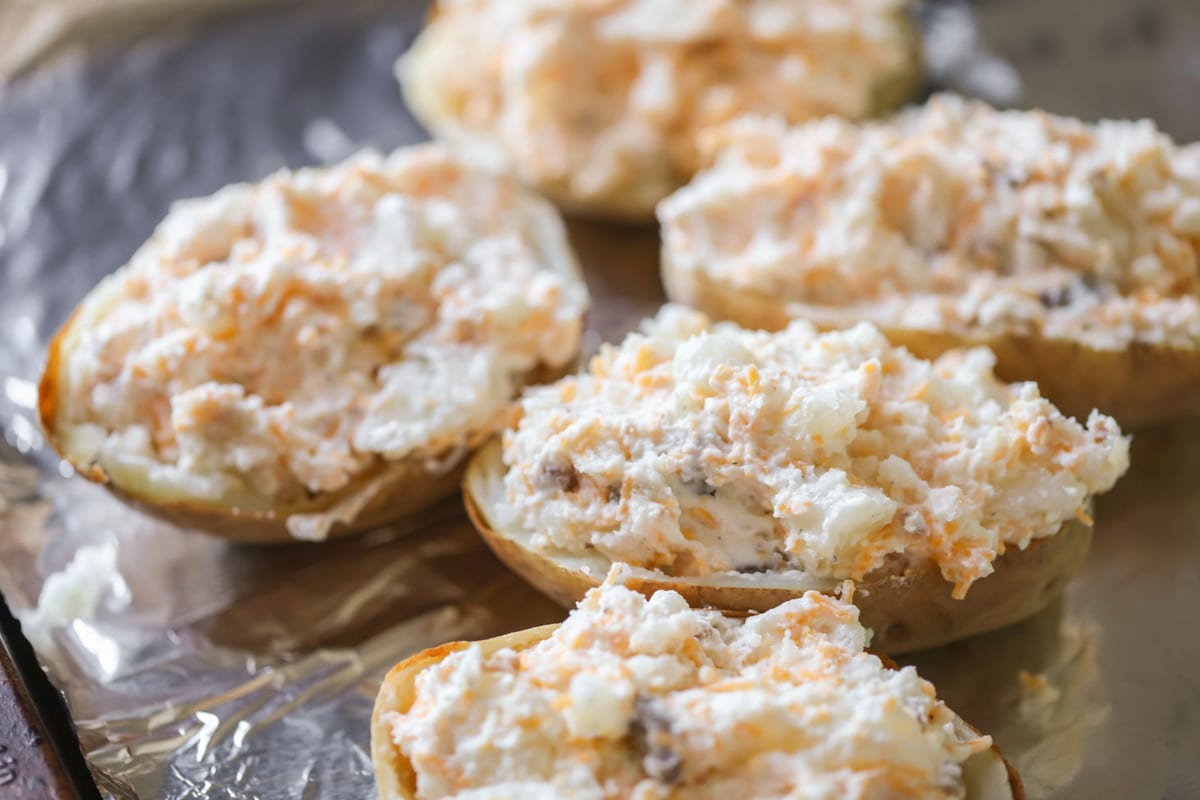 MAKE AHEAD. Follow the recipe as written, except for baking a second time. Place the filled potatoes in a covered container and store in the fridge for 1-2 days.

When you are ready to use place the potatoes on a baking sheet. Bake at 400 degrees F for 15-20 min or until hot and cheese is bubbly.

FREEZE. After making the recipe allow the potatoes to cool. Wrap individually using plastic cling wrap and place in a freezer bag or other airtight container. These can freeze for up to 3 months. When you’re ready to use take the desired amount, thaw overnight in fridge, unwrap and top with additional cheese.

You can also microwave a thawed twice baked potato. The result may be a little more “mushy” than heating in the oven, but still delicious.

GRILLING. Yes, it is quite similar to baking in the oven. Wrap the potatoes in foil and place on the upper grill gate. Heat the grill to 400 degrees F and bake until the potatoes are tender. This will take about 75 minutes.

Remove the potatoes from the grill, cut in half and follow recipe directions. Once the potatoes have been filled place them back in the heated grill on the lower grate for 15-20 minutes until hot and cheese is melted. 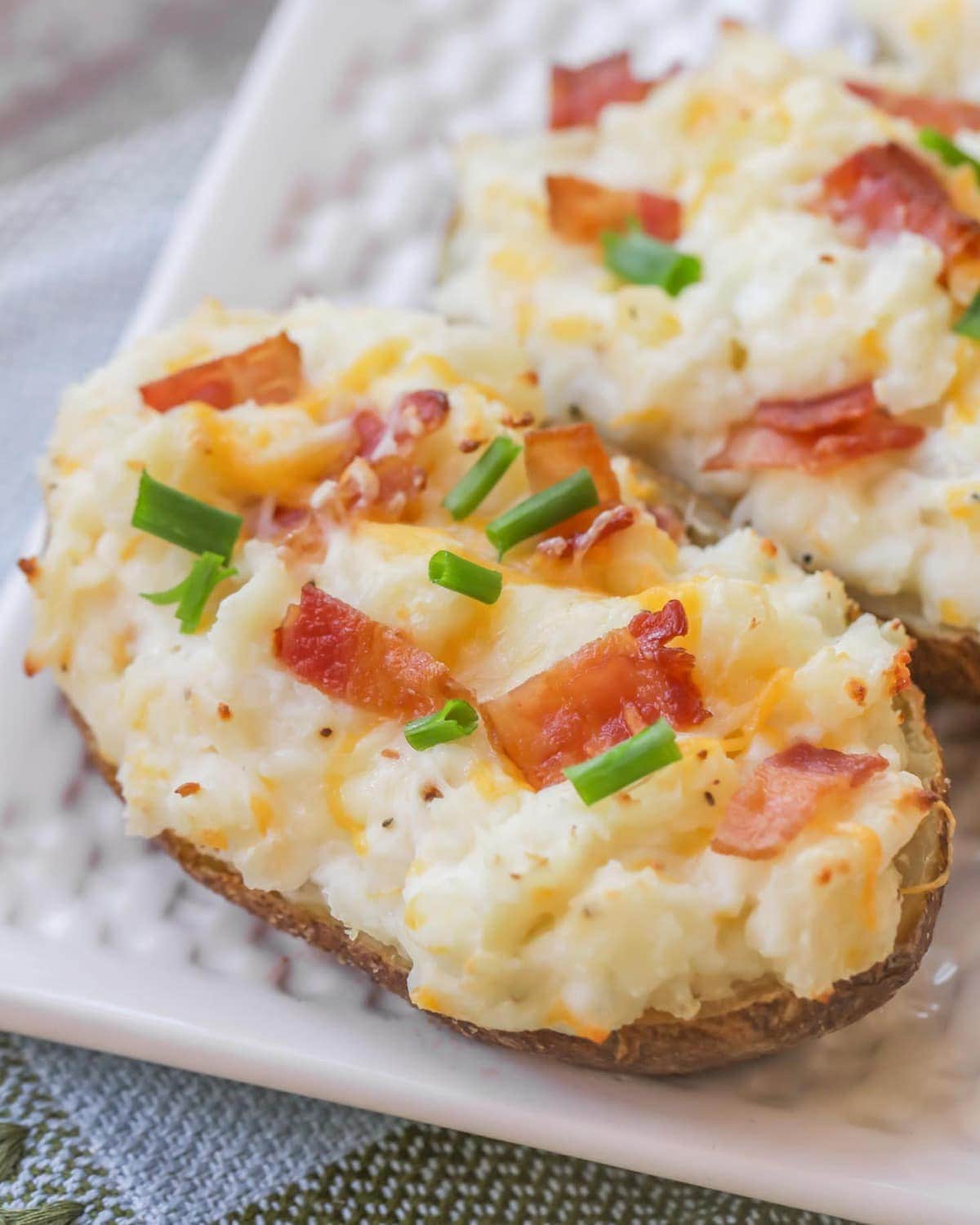 Making for a Large Crowd

We always run out of these potatoes at functions since most people end up grabbing two. Just note that it should make fewer than double the amount of the potatoes you cook because you fill them with more filling than what you get from one half potato. Here are some numbers to help with that: 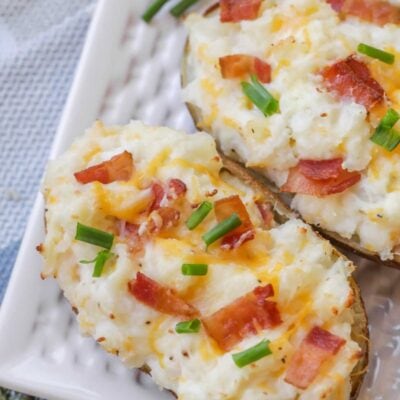 And for the casserole version of this recipe, check out: Twice Baked Potato Casserole 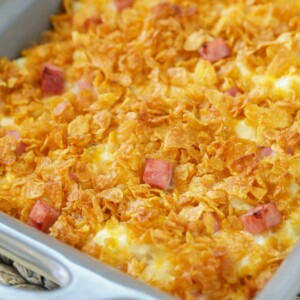 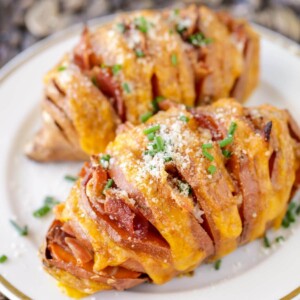 Cheesy Hasselback sweet Potatoes are stuffed with cheese, bacon and so much flavor. It’s one of the yummiest ways to serve potatoes. These savory hasselback sweet potatoes make one heck… 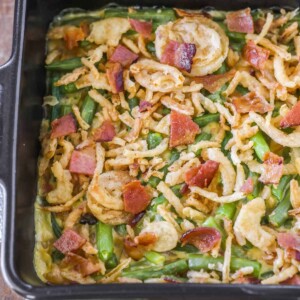 Green bean casserole is a yummy, classic side and with bacon, it’s takes it to another level. We love that this side is great for any holiday and perfect for… 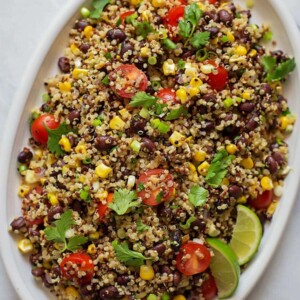 Southwest Quinoa Salad is bursting with freshness. It’s got a ton of texture going on and a whole lot of flavor! Serve this southwestern quinoa salad warm or chilled, it’s…