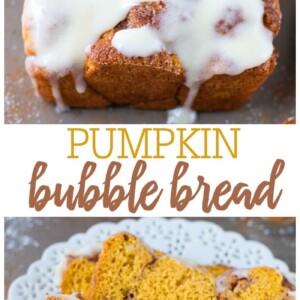 Pumpkin Bubble Bread is a unique treat you can enjoy in the fall! Pumpkin-flavored bread filled with lots of cinnamon, and topped with a delicious cream cheese glaze, ready to be pulled apart and devoured.

If you’ve ever tried our cinnamon pull-apart bread, imagine that but filled with pumpkin flavor, and topped with a delicious glaze. This pumpkin bubble bread is one of our new favorite fall-time bread recipes! 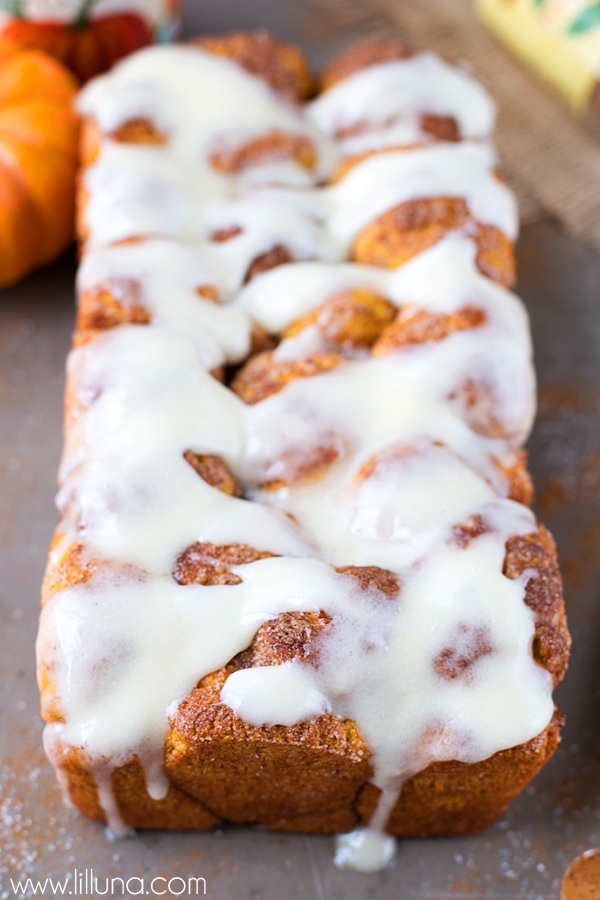 Three delicious recipes in one

Hello Lil’ Luna readers! It’s me Natalie, from Life Made Simple. Today I’m sharing a version of one of my favorite fall treats. I love pumpkin cinnamon rolls, and ever since I made my first batch a few years ago I just can’t seem to get enough! Instead of making traditional cinnamon rolls I thought I’d switch things up a bit and do a mashup of sorts.

This unique bread is a combination of cinnamon rolls, monkey bread and pull-part bread… three delicious breakfast treats baked into one incredible loaf! Best of all, this bubble bread is loaded with all kinds of pumpkin and cinnamon flavor!! 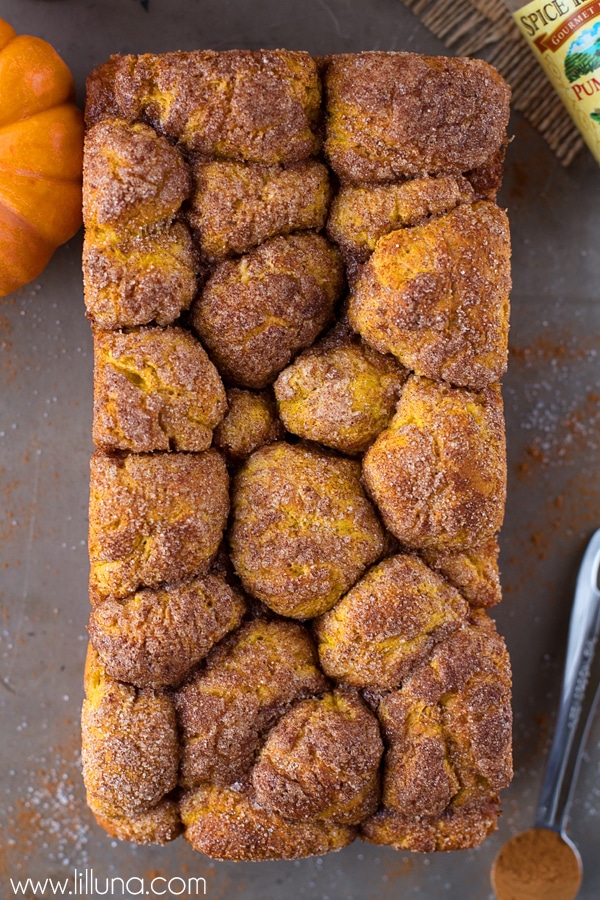 How to Make It

Making this bread is basically the same as making cinnamon rolls, but instead of rolling out the dough into a large rectangle, you create lots of little balls of dough.

Once you have your dough balls, just dip them into some melted butter, roll them in a cinnamon/pumpkin pie spice/sugar mixture and then layer them in a standard size loaf pan. It’ll look a little like monkey bread 🙂

Bake until golden brown and set in the center, then drizzle with a buttery cream cheese glaze. Tip: If you feel like getting a little creative you can sub the vanilla for maple or even add a pinch of cinnamon to it! 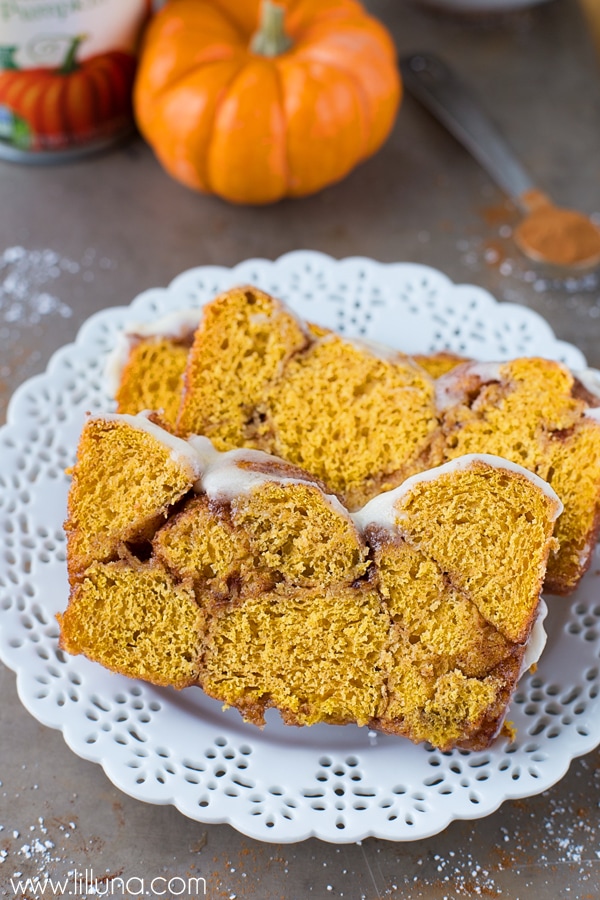 Tips for Yeast: Working with yeast can be a little tricky. Here are a few tips to make sure this bread turn out perfectly:

Speed up the rise time: One of the downfalls of making yeast bread is that it usually takes quite a while because you have to wait for the dough to rise. To speed up the process, use a warm oven.

How to eat it? What I absolutely love about this bread is that you can pull it apart and eat the little bubbles by themselves or you can slice the bread and see all of those pretty swirls inside. Either way it’ll taste amazing!!!

Store leftover bread: Leftovers can be covered and stored at room temperature for 3-4 days, or wrapped in plastic wrap and then frozen for 1-2 months. To reheat thaw and warm them up in the microwave or cover with foil and heat in the oven set to 200 degrees F. 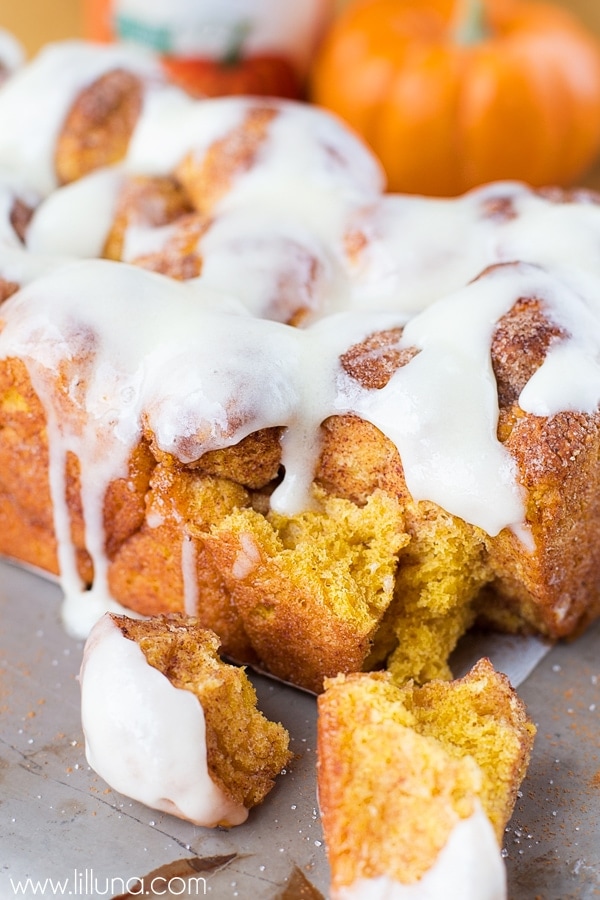 I hope that the next time you’re looking for a cozy fall bread you’ll give this one a try, I think you’re going to love it! Happy baking!!! 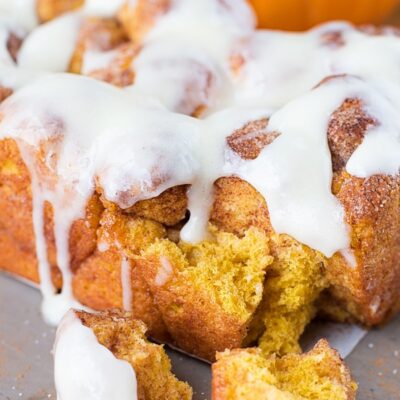 Um – WOW!! Seriously – this looks amazing!! I’m drooling, Natalie!! Be sure to check out all of Natalie’s yummy recipes on Life Made Simple! 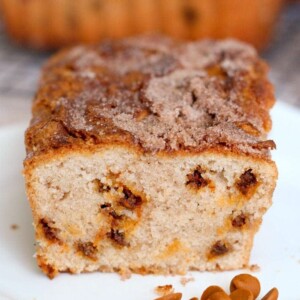 This Snickerdoodle Bread is so delicious and easy (no yeast involved)! It’s filled with cinnamon chips and topped with cinnamon and sugar! I love making bread, especially quick bread like… 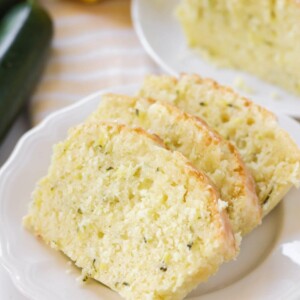 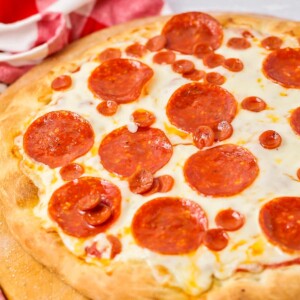 This Homemade Pizza Dough is easy and delicious. Ditch delivery and have a pizza-making night with this simple and soft pizza dough. Pizza is one of my family’s all-time favorite… 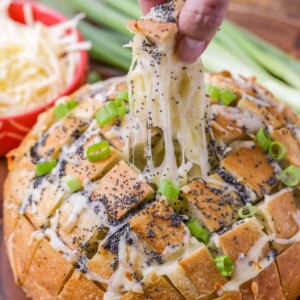 Pull Apart Bread is a favorite appetizer and perfect for sharing. There is cheesy, delicious goodness in every bite! Pull Apart Bread makes such a perfect party-pleasing appetizer. Southwest Egg…