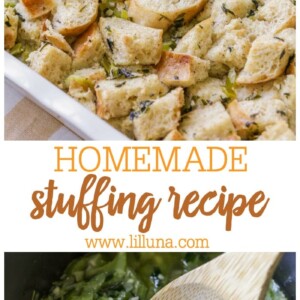 This Homemade Stuffing Recipe, made with sourdough bread, is exactly what you need to pair with your Thanksgiving turkey!

Just like Dinner Rolls, Mashed Potatoes, and Cranberry Sauce, this Homemade Stuffing is a must-have on the Thanksgiving Dinner table. It’s the perfect compliment to your Turkey – simple and perfect.

Making Stuffing homemade is the only way to go for your holiday meals! It’s one of those dishes that goes perfectly with all of the other entrees and side dishes. You’re going to want to save room for this Homemade Stuffing!

This Stuffing Recipe is just the right texture and flavor! Not soggy like some other homemade recipes.

You can even decide how big, or small, to make your bread cubes.

A traditional Stuffing Recipe is most popular for Thanksgiving, but we sometimes have it at Christmastime too. Especially this one, made with thick bread pieces, celery, butter, and tons of delicious herbs!

How to Make Stuffing

A classic stuffing recipe starts with the bread. Pick out a bread that is thick and will soak up all the flavors of the dish. We love to use a good artisan loaf of sourdough bread. Precut bread crumbs are also perfect for this dish.

BREAD. Prep the sourdough bread. Cut the bread into ½-1 inch pieces, and let them dry out overnight. For a time saver, place the cut bread onto a baking sheet and bake for 20 minutes at 200° F.

PREP. After prepping the bread, preheat your oven to 350°F. Grease a large baking sheet and set aside. A 9×13 baking pan is perfect.

VEGETABLES. Melt 8 tablespoons of butter in a large skillet. Add the onion and celery, and stir. Cook on medium heat for 5-6 minutes.

SEASONINGS. Stir in the garlic, parsley, sage, thyme, and rosemary. Cook for another minute or so.

COMBINE. Place the cut-up dried bread pieces into a large bowl. Pour the celery mixture over the top and toss everything to evenly coat.

WET MIXTURE. In a separate bowl, whisk the egg and add in the chicken broth. Pour this all over the coated bread. Add salt and pepper, and toss together to coat evenly.

BAKE. Pour the bread into your baking dish, cover it with foil, and bake in the oven for 45 minutes. After 45 minutes, take off the foil and bake for an additional 15-20 minutes, or until golden brown.

We’ve rounded up some fabulous tips to make your Thanksgiving Stuffing perfect!

Texture. The best Stuffing Recipe should be soft, not soggy, with a slightly toasted top. If your stuffing comes out too dry:

Fresh herbs. If you don’t have fresh herbs, substitute 1 tablespoon of fresh herbs with 1 teaspoon of dried herbs.

Dressing vs Stuffing. Since the ingredients are basically the same, an argument could be made that if it’s cooked inside a turkey, then it is called stuffing. Whereas if it’s cooked in a separate pan, it’s called dressing.

Instead, throw that argument out the window and look at a map. In general:

One agreeable fact is that no matter what it’s called, or where it is officially baked, it’s delicious.

Feel free to add in other ingredients or herbs/spices of your choice:

Make ahead of time. Make this a day or a week ahead of time. Prepare everything, cover it with plastic wrap, and place it in the fridge or freeze it.

STORE leftover Stuffing in an airtight container. Keep it in the fridge for delicious lunch leftovers (one of the BEST parts about Thanksgiving right??).

Leftover Stuffing can last in airtight containers in the fridge for 3-4 days.

FREEZE. Keep in an airtight container, for up to 3 months. For longer storage, wrap with aluminum foil and freeze for up to 2 months. Thaw in the fridge, before baking.

Reheat covered, in a 325° oven for 15 minutes, or until warm throughout.

what to serve your best stuffing recipe with:

While Stuffing itself does not typically contain any meat, it is often served alongside meat-based dishes. 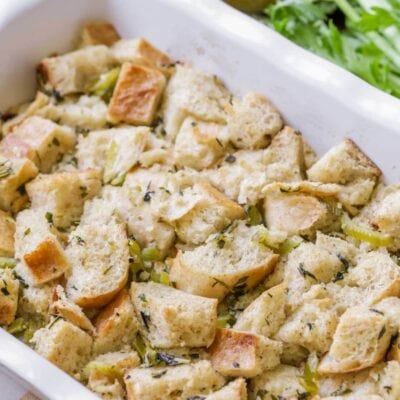 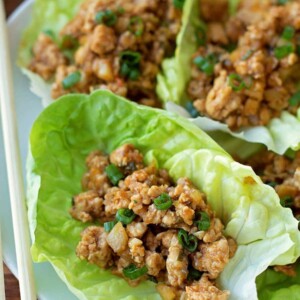 This Chicken Lettuce Wraps recipe is a copycat of a restaurant favorite. It’s fresh and filling and takes just 20 minutes to make!! We love appetizers with our Asian meals!… 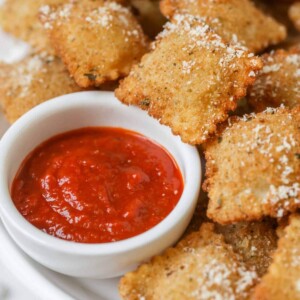 Ready to enjoy in only 15 minutes, this crispy and cheesy Fried Ravioli is a fan-favorite appetizer! We love to serve it with warm marinara. Crunchy, cheesy, and delicious perfectly… 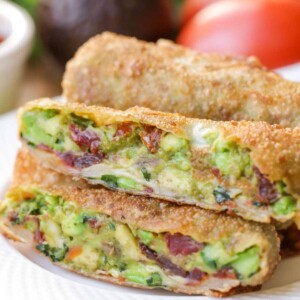 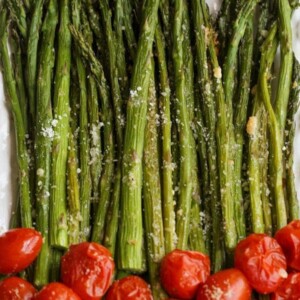