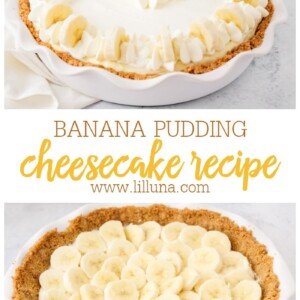 If you love cheesecake you will love this rich and delicious Banana Pudding Cheesecake! It is very easy to make and I found it is best if you leave it in the refrigerator over night. For more decadent cheesecake recipes try Cherry Cheesecake Cupcakes, Jello Cheesecake, and White Chocolate Raspberry Cheesecake.

The mixture of the homemade vanilla pudding, graham cracker crust, and fresh cut bananas will put you at the top of the dessert hall of fame. One slice will be all you need since it is so rich and creamy, but it will be worth every bite. If you are ever in need of a cheesecake that will be pleasing to the eyes and the stomach look no further.

Each bite will keep you coming back for more. Although it is rich it is not overly sweet and with the addition of the whipped cream on top if you are looking to please even the biggest sweet tooth, I promise this Banana Pudding Cheesecake with be just the dessert to make.

GRAHAM CRACKER CRUST. In a large bowl add graham cracker crumbs and ¼ cup sugar, mix until well combined. Drizzle in melted butter and mix well. Press graham cracker mixture evenly into the bottom of a 9 inch pie plate. Bake for 7 minutes or until light brown, cool completely. (This can be done the night before).

PUDDING FILLING. In a large saucepan whisk together ⅔ cup granulated sugar with flour and salt until well combined. Slowly whisk in milk until smooth. Bring mixture to a boil while stirring over medium heat. Cook until thickened.

Slowly stir in 2 cups of thickened cooked milk mixture into the egg yolks. (This is not additional milk) Add egg yolks back to the pan and continue to stir while returning mixture to a subtle boil. Cook until thickened and the consistency of pudding. Remove from heat and stir in vanilla extract.

Crust: For more crust options, use vanilla wafers for the crust instead.

This is the perfect dessert to make ahead of time. You can make it 2-3 days in advance, just cover it tightly (as airtight as possible) and store in the refrigerator. Add your toppings right before serving.

To STORE cover tightly and store in the refrigerator for up to 5 days. This banana pudding cheesecake can be frozen.

It will FREEZE well for up to 3 months. Once the cheesecake has cooled in the refrigerator, cover it tightly with plastic wrap and foil or in an airtight container and freeze. To thaw, let it sit in the refrigerator overnight. I don’t suggest freezing it with any toppings, I would wait to add them until right before serving it.

And for even more cheesecake recipes: 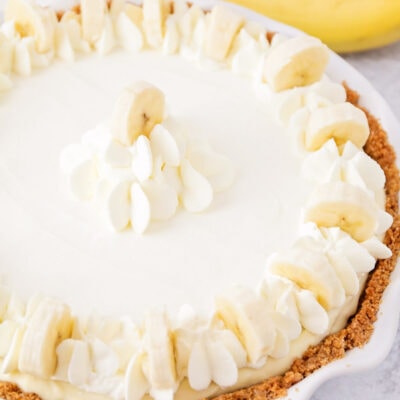 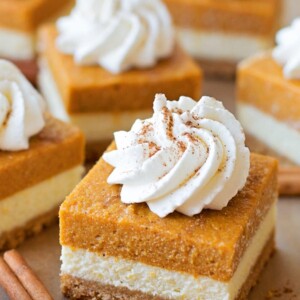 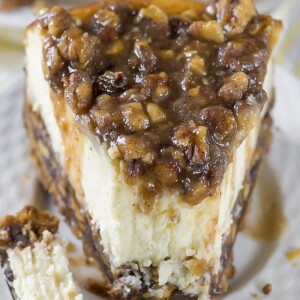 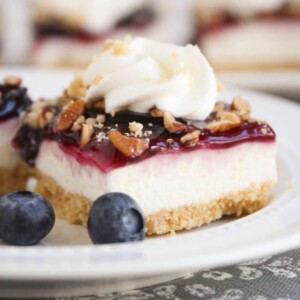 Blueberry Crumb Delight is a delicious layered dessert recipe with a cream middle and topped with blueberries and whipped cream! We love enjoying desserts like this recipe all through out… 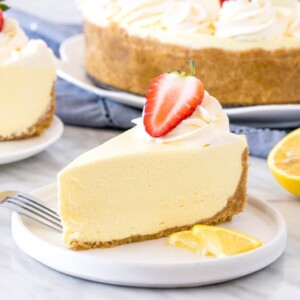 This easy jello cheesecake is completely no-bake and perfect for summer! You’ll love the tangy, creamy filling and graham cracker crust. Where are all the cheesecake fans at? Today’s simple…