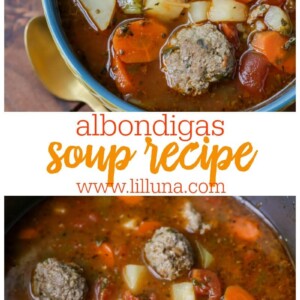 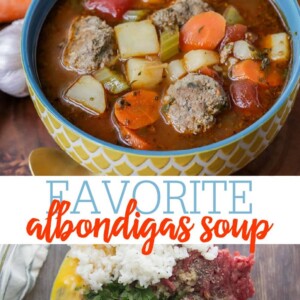 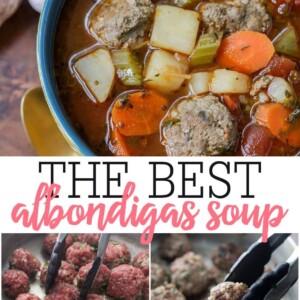 Enjoy it with warm flour tortillas or with some tacos, but be prepared to fall in love with this simple albondigas soup recipe. It’s a recipe handed down for decades and is so delicious. 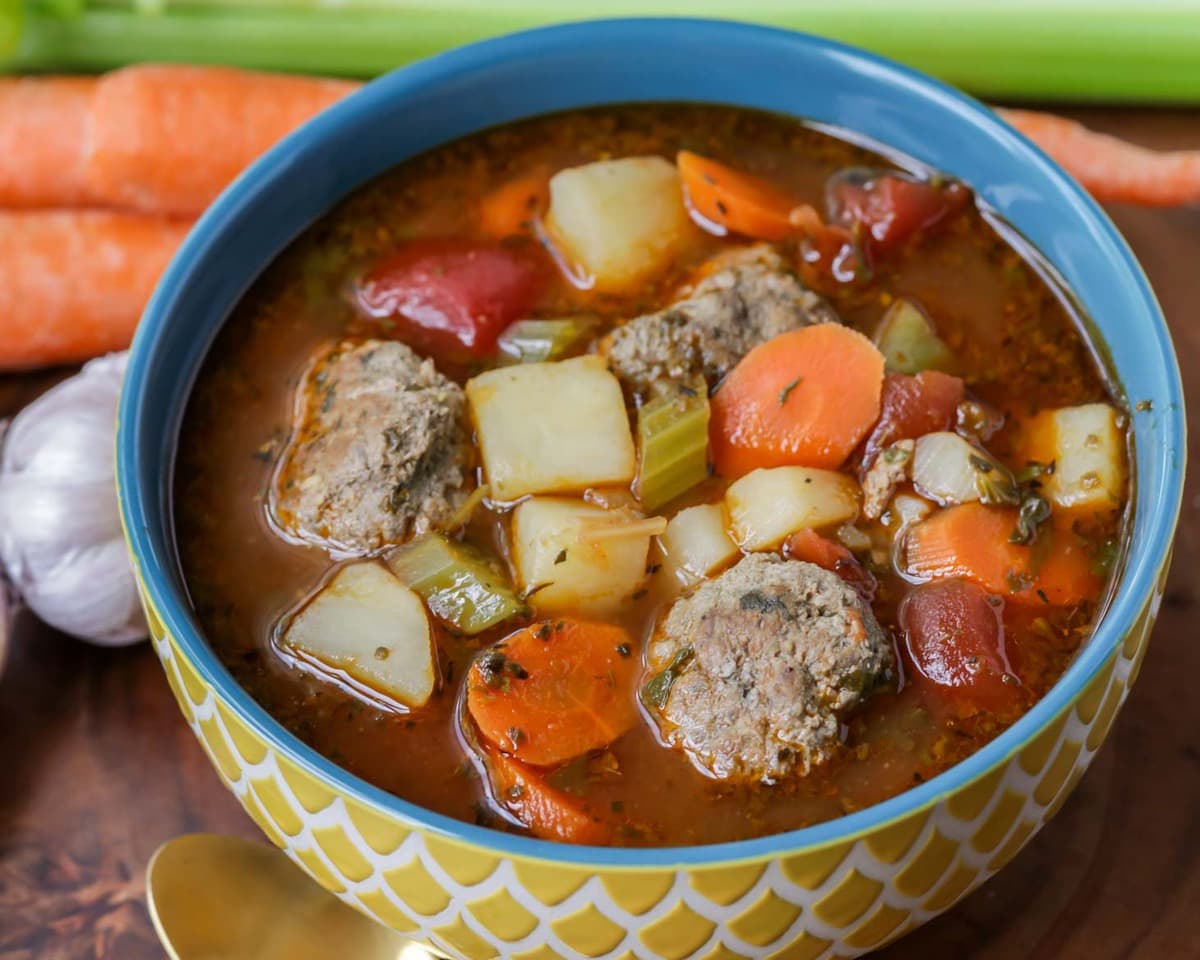 Have you ever heard of or tasted Albondigas soup? If you haven’t – you’re totally missing out! But, now’s your chance to try it.

What is albondigas soup made of? This traditional Mexican soup has a flavorful broth base filled with tomatoes and other veggies and includes homemade meatballs. It occasionally has rice in it too!

This recipe was recreated based off of the soup my great-grandma would make, and we finally nailed it! It’s flavorful and hearty and just like grandma’s!

All of the flavors of this soup are SO delicious and simple. After creating the seasoned broth base, you add the meatballs and veggies and simmer until ready – creating an easy and tasty Mexican soup recipe. 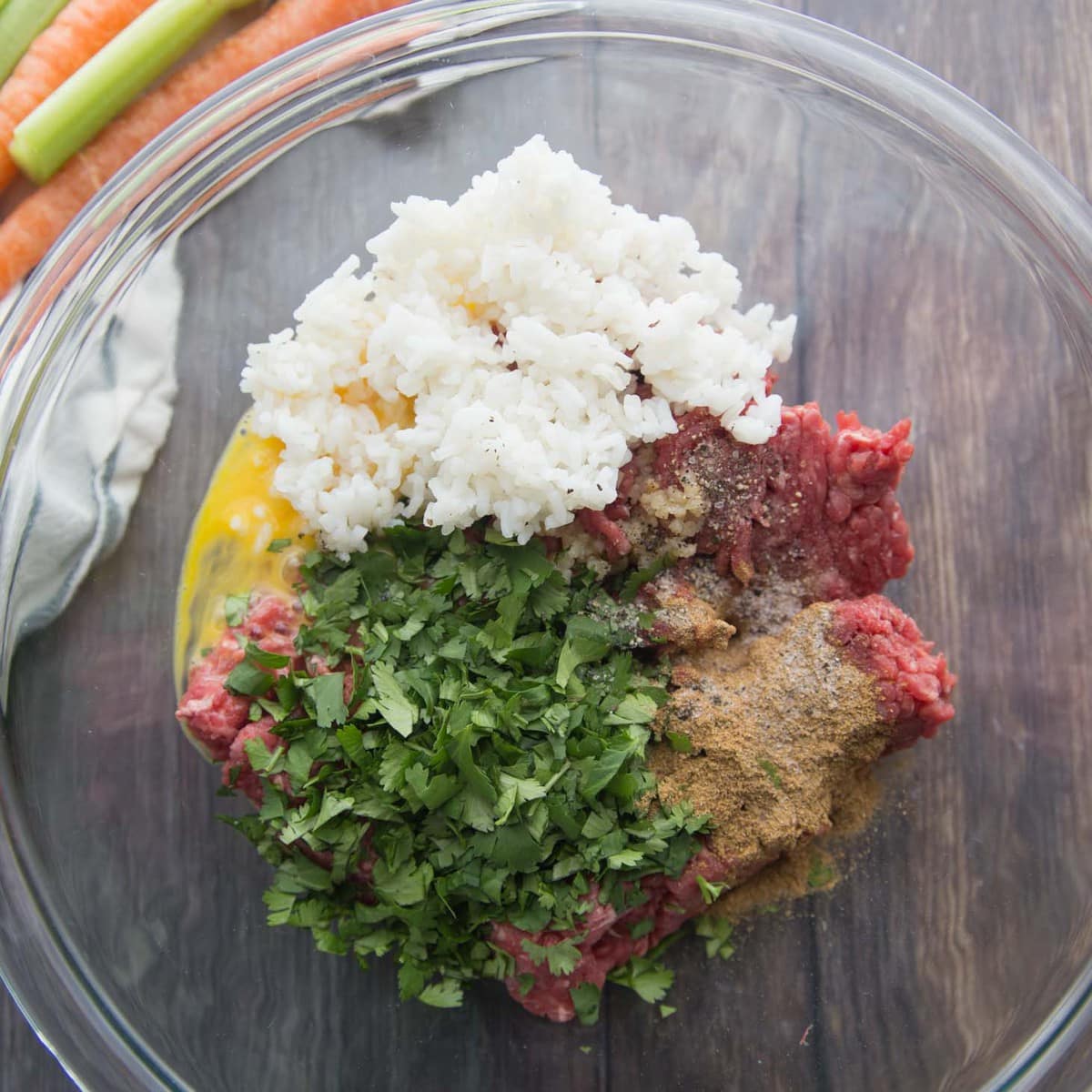 How to Make Albondigas Soup

I always start by making the meatballs first. You could use frozen or pre-made meatballs but these are really simple to make and taste so good! I promise homemade meatballs are the way to go when making Albondigas soup. Just combine the following INGREDIENTS together:

MEATBALLS. Make the meatballs by combining these ingredients and rolling between your hands (we made ours about 1 ½ inches wide). You will be able to make about 20 – 24 meatballs total. Brown each meatball for a few minutes in a hot pan. Make sure all sides are browned. Set the meatballs aside while you prepare the rest of the soup.

BOIL. Combine chicken broth, celery, tomatoes, cumin, oregano, and cilantro leaves in a big pot. Bring these ingredients to a boil over high heat. Once it’s boiling, turn the heat down and simmer for about 10 minutes.

SIMMER. Add the meatballs and potatoes to the soup mixture. Increase the heat to a boil so that the meatballs can cook a bit. Return to a simmer and cook for an additional 20 minutes. Add a little salt and pepper to your liking and ENJOY it nice and warm.

Can you add rice to albondigas soup? You can add rice to the meatballs when making them, or you can add as much as you like to the soup, cooking it for the last 20 minutes of simmering. 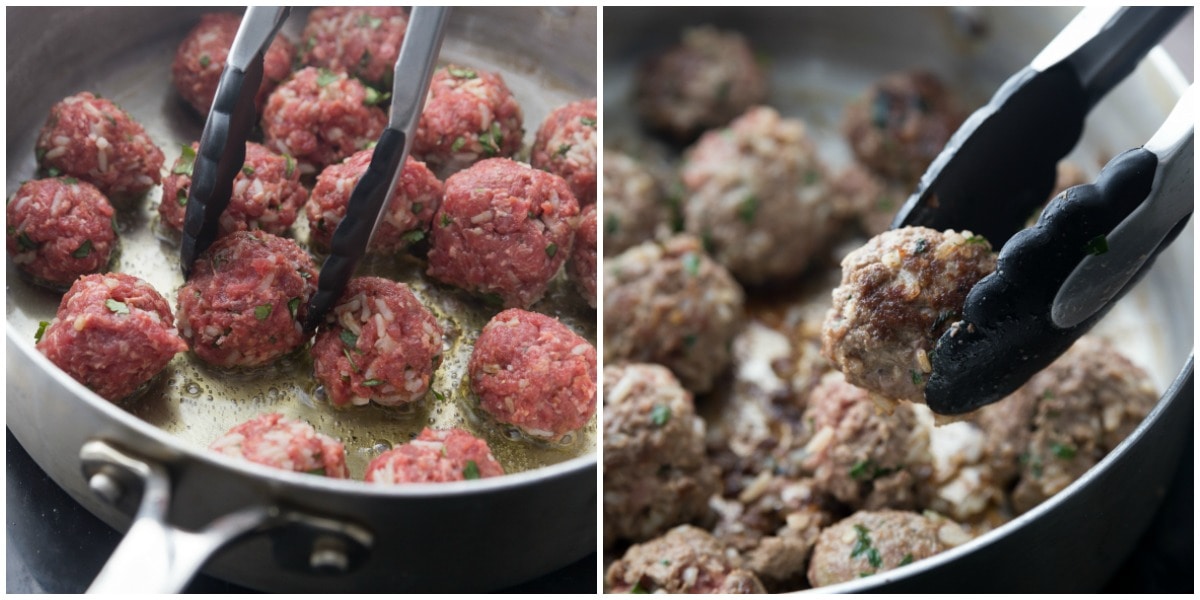 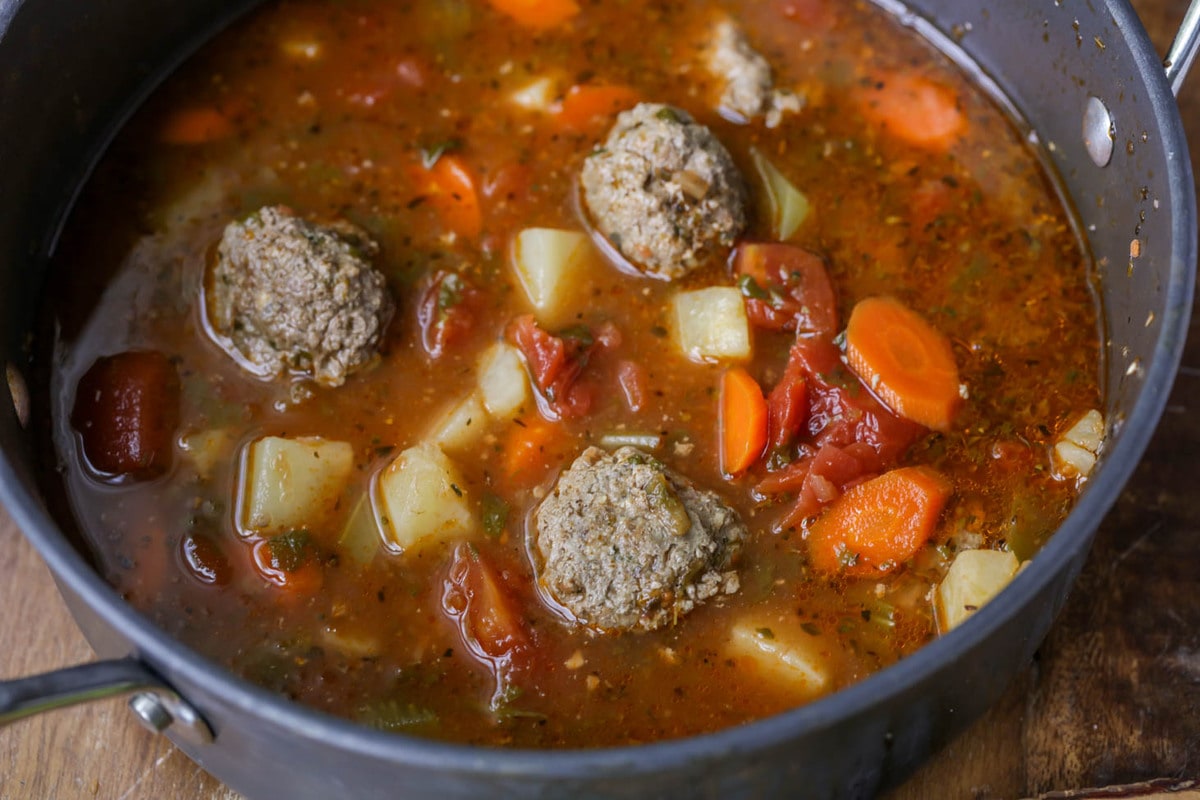 Want to make this in the crock pot? Just add all your ingredients (except for your cilantro) to your slow cooker and cook on LOW for 4 hours. Add cilantro at the very end and salt and pepper if needed.

How to store + freeze albondigas? Let cool and store in an air-tight container in the fridge for 3-4 days or freeze in containers or doubled bagged in freezer bags. To reheat, let thaw in fridge over night and return to the stove and cook until heated through. You can also microwave it as well.

Here are some recipes we love to have with albondigas: 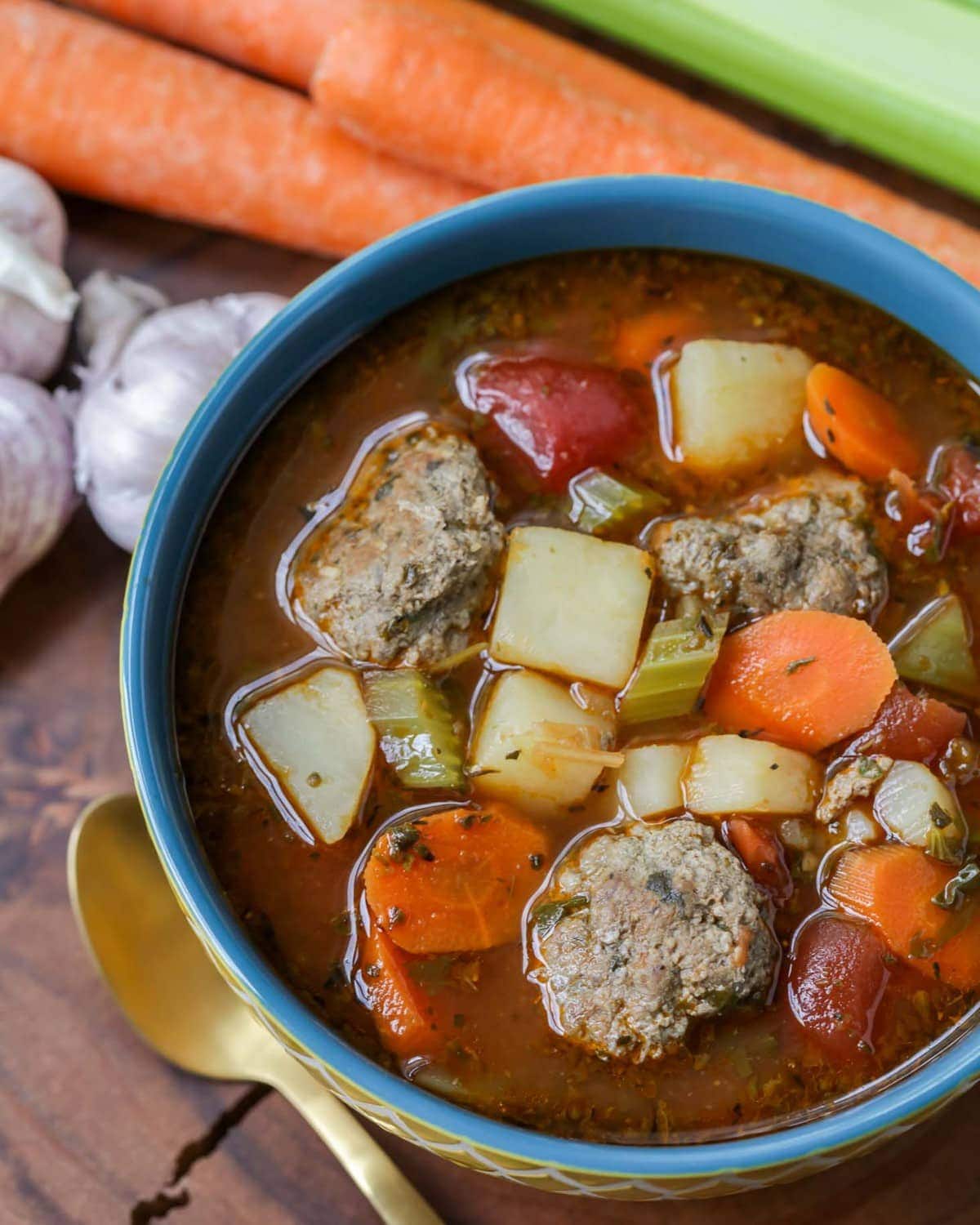 The smell of this Mexican Albondigas soup is soooo yummy and it will fill your entire house. Your family will be begging for second and third helpings! Let us know if you try Grandma’s recipe, and we hope you love it as much as we do. 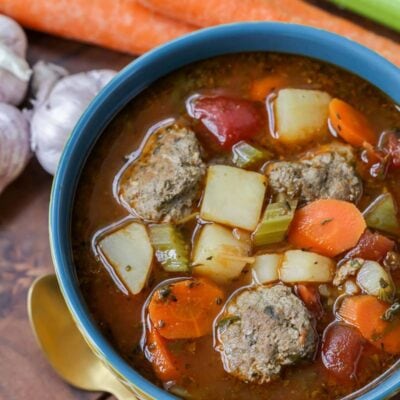 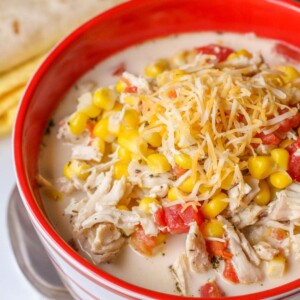 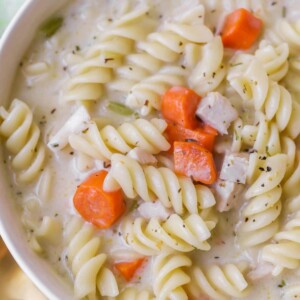 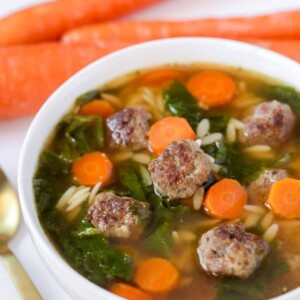 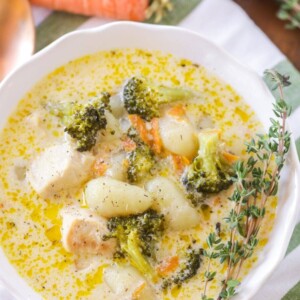 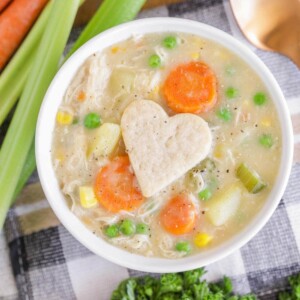 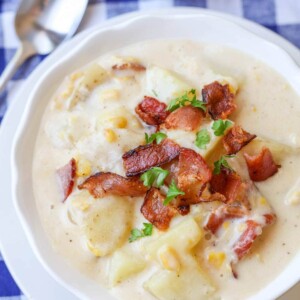