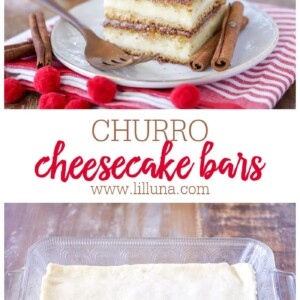 Churro Cheesecake Bars are the perfect sweet treat to your next get together. We love churro flavored treats like Churro Funnel Cake, Churro Toffee, and Angel Food Cake Churro Bites. My entire family went crazy for these decadent bars, and I bet yours will too!

When I want my house to smell like Christmas, anything with cinnamon sugar tops the list! Not only do these Churro Cheesecake Bars make your house smell amazing, they are absolutely scrumptious!

They are a perfect combination of two wonderful desserts – churros and cheesecake. Seriously so amazing! Every bite is melt in your mouth delicious.

A sopapilla is a Mexican/Latin American dish that is a fried bread dessert. It has become popular to serve it with cinnamon. This recipe is very similar to that with the addition of cheesecake in between the layers of the sopapilla.

How to Make iT

CREAM CHEESE. Beat the cream cheese till smooth. Add the sugar, egg, and vanilla and beat till smooth and creamy. Set aside.

LAYER. Spray a 9×13″ pan with non-stick spray, then sprinkle half of the cinnamon sugar mixture evenly in the bottom of the pan. Carefully lift into the pan on top of the cinnamon sugar. Press to the edges of the pan. Spread the cream cheese mixture evenly over the dough. Unroll the second can of dough and roll it out the same way as the first one. Place it on top of the filling.

BAKE. Sprinkle the remaining cinnamon sugar on top of the dough. Bake at 350°F  for about 30 minutes or until light brown.

To make these churro bars more fruity, add a layer of fruit filling on top of the cream cheese layer. The ones that I would suggest would be apple, cherry or strawberries. Either make your own fruit filling or use a canned one.

Before cutting and serving, let them cool for about an hour in the fridge before slicing and serving them. We really like to eat ours at room temperature or even colder than that. Keep them covered after slicing to avoid them drying out. To serve these you may, or may not have to use a fork, it depends on how set your bars are.

If you want to half the recipe, it’s totally possible. Half all the ingredients, using just an egg yolk instead of the whole egg, and bake in an 8×8 pan. Bake at the same temperature, but start checking for doneness around 20 minutes.

STORE leftovers in the refrigerator and eat for up to 3 days after making them. If you would like to eat them later, you can warm them up in the microwave, one at a time, for 5-15 seconds.

We haven’t personally tried to FREEZE them, but I did some research and it is suggested that they are stored in an airtight container with pieces of parchment paper between layers of the bars. Freeze them for up to 3 months. When you’re ready to devour them let them defrost on the counter until completely thawed.

For more cinnamon treats, check out: 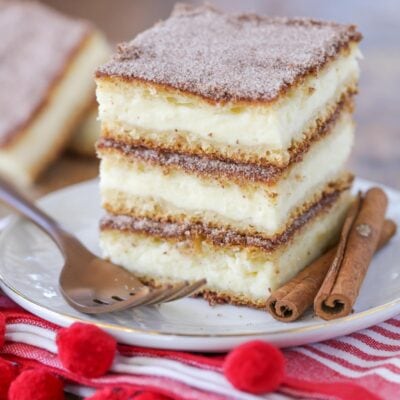 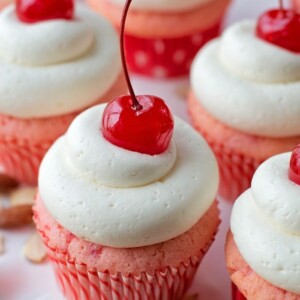 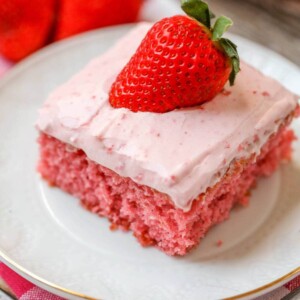 Perfect for feeding a crowd, this Strawberry Sheet Cake made with fresh pureed strawberries is especially tasty! I love fresh strawberry desserts when berries are in season. If I’m not… 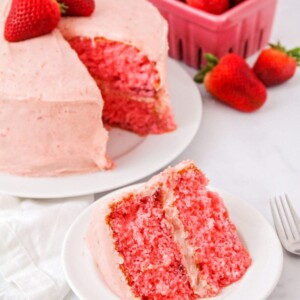 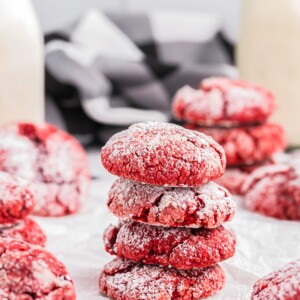